With new OS Sierra, Apple  like in previous versions, integrates lots of additional options that were provided in iOS, the OS for the apple’s mobile devices. However Sierra doesn’t simply add options from iOS, it helps both deices understand each other better and work together. Taking in consideration the fact that most of the people today primarily use iOS devices as computers, mac OS Sierra is adjusted more to assist users with their needs. 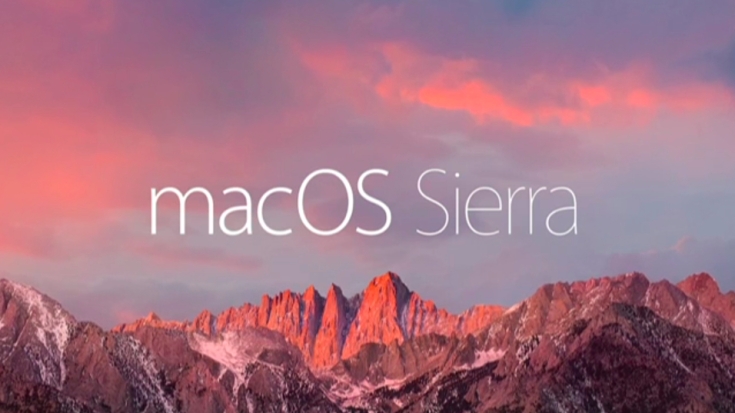 Before we continue,  you might ask, if you Should upgrade? or if your mac is compatible with new OS.

Requirements to use Apple Pay

Any Mac model from 2013 or later, iPhone running iOS 10, Apple Watch running watch OS 3, Signed in to iCloud with the same Apple ID, Two-factor authentication must be turned on.

You also got to see if your programs can still work with Sierra. If they worked with El Capitan, Yosemite, or Mavericks, there’s a higher probability it’ll work with Sierra as well. Just in case, please check prior to upgrade, if application(s) is supported by OS. Once you know that your mac is compatible and you are ready to upgrade, comes second question: how much you utilize your iDevice? If a lot, then you will love features like: Siri, Universal Clipboard (with iOS 10 and mac OS Sierra, Apple has escalated its game with Universal Clipboard: Copy something on iOS, paste it on your Mac. Copy on your Mac, paste it on iOS. Universal Clipboard is an addition to apples super-duper features like Handoff, Calls, Instant Hotspot, Mac Unlock and iMessages)  and Apple pay.

Note: If you plan to upgrade to Sierra, be sure to back up your mac before you run the Sierra installer. Always back up before installing any OS upgrades

Siri – Apple’s voice assistant, is the one of significant feature of mac OS Sierra. It’s the most obvious feature significantly visible on Mac OS.

When Siri is active, it works exactly as on iOS device. However, there’s no default setting to make Siri get activated by saying “Hey Siri”. The default keyboard shortcut to activate Siri is to hold down Command – Space-bar, or a click the Siri icons within the menu bar and within the Dock.

Siri can be used to configure system preferences. You can tell Siri to:

It currently works only with Apple apps. Apple confirmed with me that the Siri third-party API is currently only for iOS.

Other requirements are: Each device is signed in to iCloud with the same Apple ID, Each device must have Bluetooth turned on and Each device has to have Wi-Fi turned on.

With mac OS Sierra, you can store your Desktop and Documents folder in iCloud Drive and access them on all your devices. That means you can start a document on your Desktop, then work on it later from your iPhone, iPad, or iPod touch and on iCloud.com. Everything automatically stays up to date everywhere.

A few years ago, Apple decided to give up HDDs drives for the speed for flash Drives. The speed gains were spectacular, however consumers are taking lots of videos and photos, and all this is using up the space.  Optimized Storage provides more tools to handle local storage. what it does is:

it Empties Trash Automatically, permanently deletes files that have been in the Trash for more than 30 days.

Reduce Clutter helps identify large files that you might no longer need. Click the Review Files button, then choose any of the file categories in the sidebar, such as Applications, Documents, GarageBand, iOS Files, iTunes, or Trash. 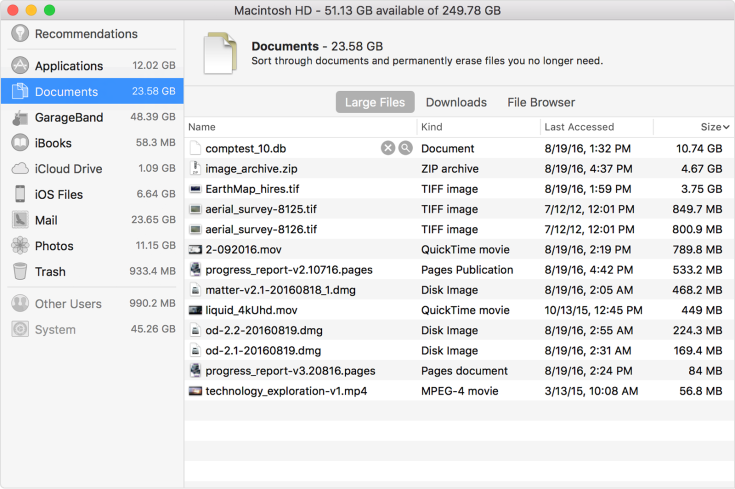 Other ways that mac OS Sierra helps save space is, it automatically takes these additional steps to save storage :

– Detects duplicate downloads in Safari, keeping only the most recent version of the download
– Reminds you to delete used app installers
– Removes old fonts, languages, and dictionaries that aren’t being used
– Clears caches, logs, and other unnecessary data when storage space is needed

With Picture in Picture, you can play video in a resizable window that isn’t blocked by other windows, so you can watch while doing other things. Catch up on a favorite show while you catch up on email, or watch the big game while playing a game yourself.

In many apps, you can reduce clutter on your desktop by having documents open in a tab instead of a separate window.

Tip: A fast way to open a new window when the tab option in Dock preferences is set to Always or In Full Screen only is to press Option-Command-N.

Apple Pay is simple to use and works with the devices you use every day. Easily pay with your debit cards and credit cards with just a touch. And because your card details are never shared by Apple when you use Apple Pay, making purchases with your iPhone, Apple Watch, iPad, and Mac is the safer, more private way to pay.

When you’re wearing your Apple Watch, you can use your watch to unlock your Mac after waking it, instead of entering your password.

Invite your friends, family, or colleagues to collaborate on a note. Then you can partner on projects, plan a trip, make a grocery list, and more. With iOS 10 and mac OS Sierra, you can add someone to any iCloud note in your Notes app. Then they can make edits and see your latest changes. And as long as your device is connected to the Internet, iCloud keeps your note up to date everywhere. So when you check off a to-do item, edit a sketch, or add an attachment, everyone sharing the note will always see the most recent version.

Add people to a note on iDevice

Invite someone to collaborate on a note through Mail or Messages. Or copy a link to the note and send it to them any other way you like. Then they can open your note and start editing, just like that.

Want to know if you’re already sharing a note? Look for

at the top of your note or

Express yourself in fun new ways. Send a huge emoji. Respond back with a heart or a thumbs-up on a friend’s message bubble. And play videos and preview links right in the conversation. 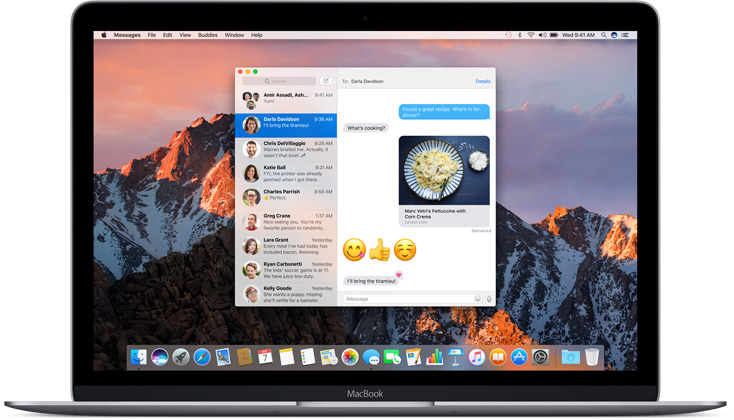 Overall, mac OS Sierra is quite nice update which was, I guess long expected.

If you own a Mac and want to have the latest and greatest OS upgrade, you must install mac OS Sierra. I typically advice not to upgrade right of way, and await for Apple to release 10.12.1 update. That’s simply to play it safe and make sure that major bugs didn’t leaked with current update. Even thought  Apple probably  did their best to deal with bugs and create fixes throughout the beta cycle.

If you are new in Mac world, you might want to look at  How to Begin Using a Mac