has been finally added to iPhone and iPad.  When you check out screen of iPhone or iPad, you will be able to interact with virtual items overlaid in real world. 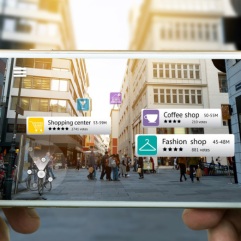 Apple is just now launching the developer platform known as ARKit, a new framework that permits you to simply create unparalleled augmented reality experiences for iPhone and iPad. By blending digital objects and data with the setting around you, ARKit takes apps on the far side the screen, freeing them to interact with the real world in entirely new ways.

Improvement in Siri and Suggestions

Siri’s interface was refreshed / redesigned and voice tones got enhanced as well. Main update for Siri is that it is suggesting follow-up questions you might have. you can interact by taping on the question. Also, multiple results for a search topic, allows to reduce the errors.

From iOS 11, Siri can do translation as well of following languages: English to Chinese, French, German, Italian and Spanish. Siri can recommend topics you might want to know based on what you were doing, like a news item or reply to a message with your location, or create a calendar appointment based on a reservation you jusd made in safari browser.

Siri can learn words from articles you use, and recommend them once you type.

Update to Camera App and Soft

• Thanks to new compression technology, Video will take up a lot less storage space.
• Low-light portraits will take advantage of optical image stabilization and HDR.
• You will loop a live picture to make a movie or loop it like in boomerang.
• you can edit Live photos, cut, trim, edit or choose the frame that is the best for you.

Recording iPhone screen had never ever been so easy. Now, you don’t have to use third-party aplications or take the help of your Mac / PC to let you capture your iOS device’ screen.

or 3D Touch to bring up menu, which allows you to turn on or off the sound for recording, simply by tapping on microphone icon in the shortcut menu

once you done recording,  tap on the status bar at the top of the screen. Now, a popup will appear on the screen. Tap on on Stop and video will be saved in photo library.

Control Center was designed to be your one-stop tool for controlling many aspects of your iOS device. except for a few permanent buttons, you’ll be able to fully customize control center to work better for your needs. additionally to the standard toggles for Wi-Fi, Bluetooth, airplane mode, media controls, brightness, volume, rotation lock, don’t disturb and AirPlay, there  are eighteen extra controls you’ll be able to add to control center.

To customize control center, open Settings > control center > customize Controls. a list of various options will show up, each with a green “+” or red “-” sign next to it.

Emergency SOS – there is an Emergency SOS option in the Settings app that allows users to turn on  “Auto Call” feature that can be set to dial  911 once the Sleep/Wake button is pressed 5 times.  Also, it send a notification to ER contact.

iMessage it will sync conversations better

When you sync to another new device, say your iPhone or iPad, iCloud will automatically sync all your conversations (which also means if you delete it on the iPhone, it’ll delete on your laptop and iPad too).

One-handed keyboards squish everything to the right or left for easier one-hand access. It can be Enabled at the bottom of the keyboard, by pressing in on the Emoji button.

GIFs In the Photos app, GIFs saved in the Camera roll now animate when opened. In the main album view, they are still, but will work properly when tapped.

New iOS addition –an app “Files” – The new Files app provides a central space for users to browse, search, and organize files — including files in your apps, on other iOS devices, in iCloud Drive, and across other services like Box and Dropbox. Users can open files right from within your app with the new, standard document manager in iOS 11. Take advantage of service-specific APIs from cloud storage providers and use iCloud Sharing to let users easily share their files.